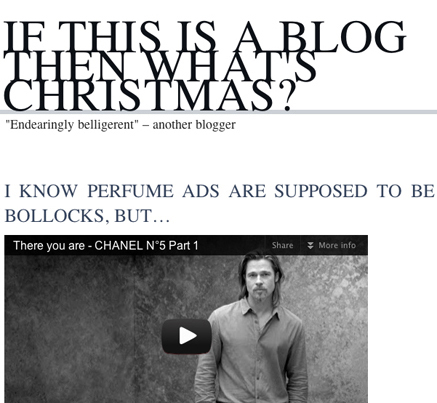 This is what Ben Kay’s excellent advertising blog looks like, or at least a part of it.

Unlike publishing, many people in advertising have been blogging like crazy for years. It’s part of their culture and they’re good at it. There are many notable sites, Only Dead Fish is great for marketing, Dave Trott for creative thinking and Adliterate for planning are all well worth reading. But Ben Kay’s ‘If This Is a Blog, Then What’s Christmas?’ if not the best, is certainly the most controversial.

Ben is Creative Director at MAL London. He’s done a ton of great work, and is currently working on the Apple account. But that aside, it’s his blog that seems to be maintaining his reputation and notoriety. Which we heard all about when Ben came into IPC yesterday. He gave a wonderful talk, full of charm, substance, and by his own admission, mistakes.

He used these as his metaphors for how to create new things. Or perhaps a post-rationalisation for a spectacular series of early career cock-ups that would have clearly sunk a lesser talent.

Either way, it hardly matters. His blog is genuinely fantastic, quick links, short form, longer pieces, tons of comments, the lot. The design is brilliant, but from a typographic point of view, there are lots of what might be seen as mistakes.

From the crash leading in the title and justified cap heads, through to the even more widely spaced bold caps in the right rail, the design is deliberately ‘off’. It’s understood that this whole thing is a work in progress. The paint is still wet, new content will be arriving imminently. It’s a fantastic example of how to stretch Times New Roman beyond endurance, and yet still retain the authority and trust held in the letterform DNA. Stanley Morrison will be spinning in his grave.

It might appear to be flung together, but I have no doubt every detail is intentional. Amazingly, it seems to be an off the shelf wordpress theme called blog.txt. It’s designed by Scott Wallick, who, on his own site describes himself as ‘An editor making more mistakes than corrections’.

This not only chimes with Ben’s talk, but works commercially, as according to WordPress for Dummies, blog.txt is in the top ten of wordpress themes. Who knew!