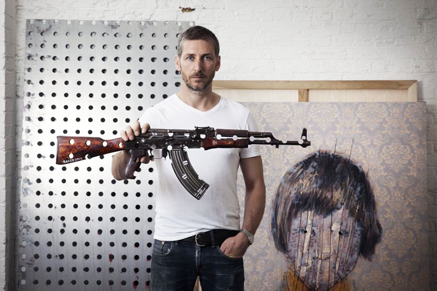 Charming Baker has been big news for a while now. But today this email flopped into my inbox: ‘Charming Baker joins some of the biggest names in British art to support the AKA Peace auction, curated by Jake Chapman.

Bloody hell. You don’t get better company that!

But aside from his wonderful work, the story of his rise to fame, and the part played by former magazine journalist Tim Fennell, still gives me endless pleasure. You can read all about it here, but in a nutshell, what happened is this…

Tim started collecting art 8 years ago. He found some paintings he liked by the then unknown Mr Baker, and decided he was going to drop everything to work with the artist to promote his career. Tim ignored the galleries and took on the role of manager, pr, producer, marketeer, fund-raiser, risk taker, agent, advisor, investor, confidante.  He built an independent fanbase through word of mouth and astute use of social media and set up his own exhibitions.  He even made Mr Baker change his name (Charming’s real name is Alan) to help re-brand him and push him to the top of the Google tree and major collectors must-have lists.

AKA Peace will raise funds for Peace One Day’s Global Truce 2013, a campaign for the formal establishment of a worldwide ceasefire day. Peace One Day is spearheaded by British documentary maker Jeremy Gilley with close support from Jude Law. Charming Baker’s gun, entitled A Brief Holiday From Despair, sees the weapon neutralised, shot full of holes. The auction will take this Thursday 4th Oct at Phillips De Pury, London.’

The thing I’m fascinated by is to see how the market establishes Charming’s value against this company. The AKA brief makes it a completely level playing field, as everyone is working with exactly the same raw material. I don’t think I’ve ever seen this happen before, except in art school.