Three ways to stop your content going down the toilet

Crap. That’s the word that begins content marketing agency Velocity’s slideshare, now downloaded over half a million times. Their argument is that so much content is now being produced by marketers, social media agencies, production companies and PR’s that it’s inevitable we’re all going to drown in a flood of content that’s just plain rubbish. (Brilliantly skewered by Clickhole, logo above)

It’s a good looking dek, but at the end, when I was expecting there to be an antidote to this tide of garbage swilling around my ankles, I discovered that their answer was… ‘Raise your game’.

So what does this platitude actually mean? It’s an important question, because unless we work it out, trust in journalism, publishing and the brands we serve will just melt away. And without trust we have nothing.

Storytelling may be the basis of human experience, but it means diddly-squit if the source is untrustworthy. 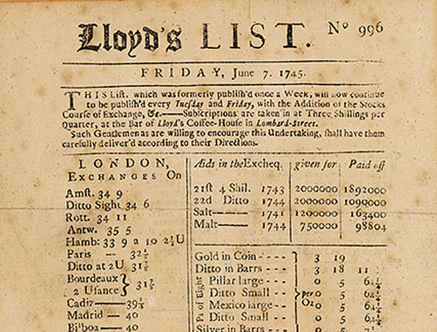 This is why media brands came into being. Starting with the 17th century Lloyds List, then newspapers, magazines, TV stations and radio channels, society has enthusiastically embraced the idea of trusting a story told by an organisation, as opposed to a known individual. But that’s history. And whilst it may not be bunk, we are all now experiencing a very different reality.

Big old media brands like The Times, Vogue and so on now feel a bit like countries, with recognisable borders, laws and customs. But much like the geo-political landscape, the new media powerhouses are stateless. 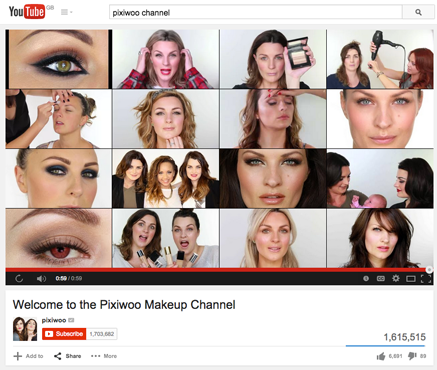 BuzzFeed is now on its way to being valued at a billion dollars. Beauty bloggers like Lisa Eldridge, Pixie Woo and Zoella get millions of views on YouTube, and are treated like rock stars. Brands themselves like ASOS, P&G, Sports Direct and countless others have realised they no longer need to rent media when they can own it.

Add all this to the way in which we actually consume content, and we have a situation where media ownership no longer exists. Everything is right here, right now, and free.

More than ever before, publishers have to prove their content is trustworthier than the competition. Trusted enough to retain our attention, encourage us to share it, and in many cases actually pay for it.

That’s challenging enough, but due to the rise of native advertising or any one of the 17 different ways of describing ‘brand journalism’, publishers now have the added task of maintaining the relationship between Church and State. When ads no longer look like ads, the audience needs to know who’s telling the story, and why. 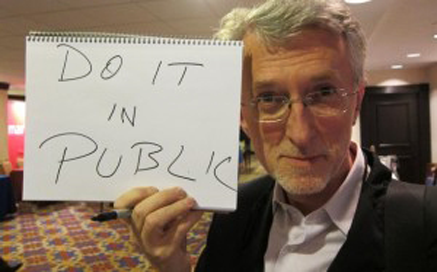 Respected commentator Jeff Jarvis, writing about Forbes’s native advertising initiative ‘Brand Voice’ says: “I hesitate three beats before clicking on a Forbes link. That is the definition of a devalued media brand.” This has more to do with labelling than principle, but more on that later.

Here at the SPD, our craft may be changing, but the basics remain true and the goal is still the same. Same as it ever was, if we want to be trusted, here are three things we must always do, and two things that will ruin us. 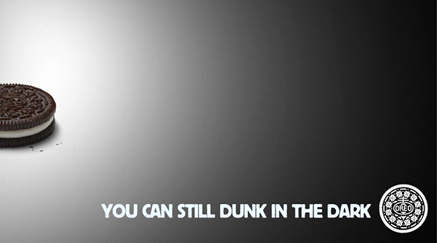 We’re all viewers first, and readers second, we make our mind up about content pretty quickly. Three seconds for a magazine cover, down to nano seconds for a tweet, regardless of whether it’s from Vogue or Oreos.

This means how it looks in the very first instance is absolutely essential in building trust. The right font, color, or picture all make a difference, but only if the presentation is absolutely in line with the content’s intention.

‘Design’ cannot just be painted on. It needs to be a fundamental expression of the content’s authenticity. It’s only when the storyteller trusts themselves that you can trust the content. That’s what authenticity looks like. 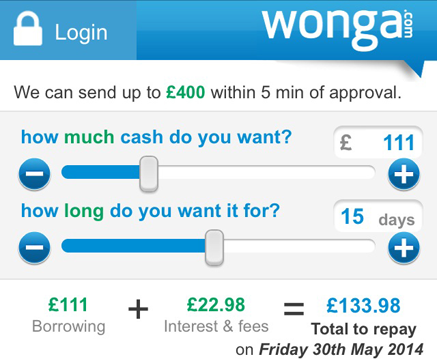 It’s essential to talk to your audience in a tone of voice that they can hear. Channelling what the reader is feeling is often way more valuable than merely stating what the writer is thinking.

This is really important in the digital space, a colder landscape where emotional expression can tend toward the reductive. It’s essential that writing needs to be warm, personable and memorable.

Usability is obviously essential in building trust. But really sophisticated UI can generate feelings above and beyond the content itself. A fine example of this is the UK payday loan lender Wonga’s slider, best seen on mobile. Wonga’s business is morally dubious, their behaviour borderline criminal and their PR is a disaster. But the illusion of control this interface creates is just genius, proving Steve Jobs’ mantra ‘the interface is everything’. 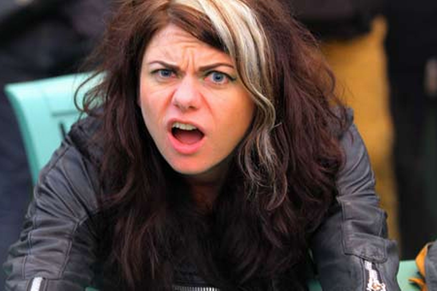 The highest goal for a media destination is to have a reason for the audience to return, time and time again. Tone alone can do this, as the Daily Mail proves with their carefully curated xenophobia. Specialist or exclusive content works too, but that power is dwindling as so much can now be found online.

So a hidden hook literally needs to have a life of its own. Often called a franchise, it needs to contain a strand of brand DNA, be capable of existing outside the host and to operate deep in the reader’s psyche.

Franchises can be real people; the genius that is Caitlin Moran (above) is a fine example, as her London Times column must be responsible for a substantial percentage of their paywall audience. Like Caitlin, the best franchises are always different, yet always the same. Similar to a Big Mac, readers know what they’re going to get.

Creating a great franchise is much harder than it looks. Many editors swear blind they’ve got loads, when all they really have are features. A lack of franchises won’t ruin the business, but here are two things that certainly will… 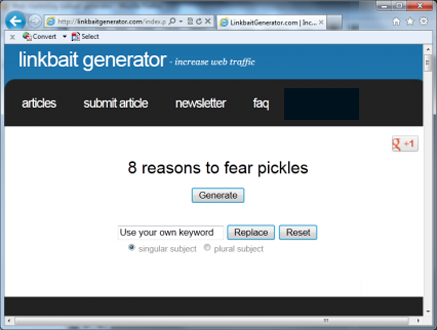 “You’ll never believe what happened next…”

This is the legendary curiosity gap, skilfully exploited by the likes of Upworthy and Viral Nova. The numbers claimed by both sites are impressive, but this excellent post at Buzzfeed explains why this technique holds little long-term value. Whether you use a linkbait generator or not (above). 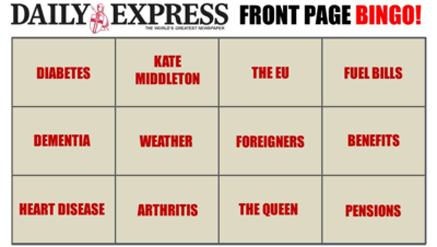 Losing sight of the reader

Here in the UK we all laugh at the Express Bingo site, which beautifully predicts the 16 cover stories that the Daily Express runs on rotation. Arthritis! The Weather! Pensions! Dementia! Diana! Romanians! etc. But this remains a master class in how to maintain a relationship with a loyal readership, albeit one that’s slowly dying off. 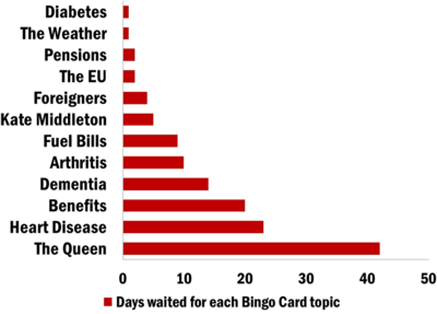 There are plenty of discarded media destinations that failed to understand what their audience really wanted. Newsweek in the US, Easy Living, She and Shoot in the UK all spring to mind, you can be sure there will be more soon enough.

Native advertising would have made no difference to these titles, as none had a digital dimension. But for the rest of us, integration of commercial content is the issue. The term may be temporary, but the effects of dissolving the relationship between Church and State will be permanent. 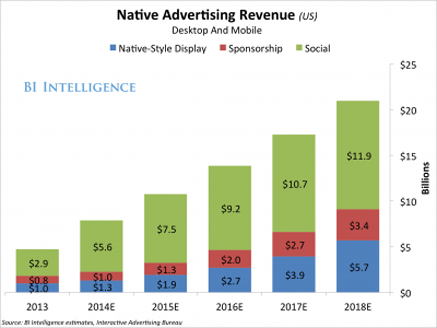 The Guardian reports BBC Economics editor Robert Peston saying: “Over time the impression may be created that all editorial is for sale, and none of it to be trusted.” He accepts that native ads seem to work, but questions whether readers ever notice the ‘sponsored content’ labelling. His darkest fear? “How we as an industry are prone to cut corners in a hideous way when we face an existential threat, or indeed when there is money to be made.”

Robert says that, regardless of what readers may want to share, an editor’s ability to decide what stories really matter is sacrosanct. I agree. Whether a public service broadcaster or a paid-for brand, the editing itself still remains a valuable benefit.

For me, the two challenges with commercial content are making sure that integrity is not impeached, and then to work out who’s going to create and curate it.

To the first point, I believe labelling does work. But it’s got to be clear. Here’s Jeff Jarvis again: “I’ve long said that if you have to put a link next to a label saying “what’s this?”, then the label clearly isn’t clear enough.” 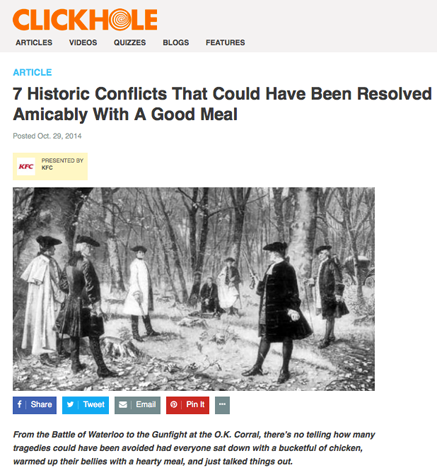 Much better to let the content do the job itself, whether that be The New York Times story on women Inmates sponsored by Netflix’s Orange is the New Black or the genius of Clickhole’s totally upfront declarations, seen above. For more on the success of the Onion’s bastard child, take a look here.

But as to who makes this content, that’s more complex. The New York Times, BuzzFeed, Hearst, Time Inc., Bauer and many others may have separate teams creating native advertising, but frankly, everyone is now creating content on both sides of the commercial coin.

Defining who’s doing what and why is tricky, as ultimately we’re all creating different flavours of the same thing; attempts to get consumers to read things which the company in question, or its executives, wants those consumers to read.

The more ‘serious’ the journalism, the harder it is. The Forbes experience has agitated commentators in a way that BuzzFeed never does. It’ll be interesting to see what Jeff Bezos’s ambitions for The Washington Post are going to look like in this space.

Because as Felix Salmon, writing at Reuters, reminds us, none of this is easy. In fact, “trying to get consumers to read anything at all, in a world of almost infinite choices, has never been harder.”

This article was first published by InPublishing