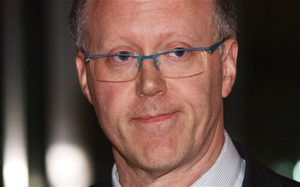 The BBC Director General, George Entwistle, announces his resignation from the BBC outside New Broadcasting House in central London, after recent news program problems, Saturday Nov. 10, 2012. The BBC’s director general had said earlier Saturday that it should not have aired a report that wrongly implicated a politician in a child sex-abuse scandal, admitting that the program further damaged trust in a broadcaster already reeling from the fallout over its decision not to air similar allegations against one of its star hosts. George Entwistle’s comments followed an embarrassing retreat for the BBC, which apologized Friday for its Nov. 2 “Newsnight” TV show on alleged sex abuse in Wales in the 1970s and 1980s. During the program, victim Steve Messham claimed he had been abused by a senior Conservative Party figure. The BBC didn’t name the alleged abuser, but online rumors focused on Alistair McAlpine, a Conservative Party member of the House of Lords. On Friday, he issued a fierce denial and threatened to sue.