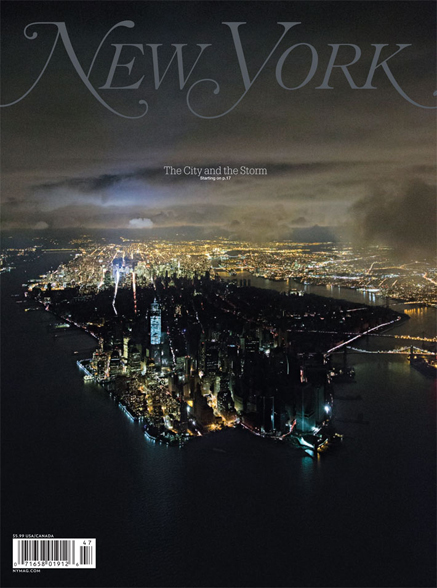 Here is the latest, much admired New York Magazine cover, showing what the city’s power outage looked like after Hurricane Sandy. For the full story, have a look at this excellent post at Time, that explains exactly how New York Magazine conceived and executed this amazing photograph.

In order to illustrate the story, Jody Quon, Director of Photography,  decided to shoot from the air. She flew in Iwan Baan, a specialist urban architecture photographer, and then sent him up in a helicopter to take the shot. The result is a masterclass in producing a single, iconic image that captures an entire story. It’s American editorial muscle in full effect, about as far away from Instagram as you can get.

But is this the best way to visualise a disaster?

No-one wants to read about extreme weather, they want to look at it. When the tsunami hit Japan in 2011, nothing could match the awful, but utterly compelling videos that seemed to go up every hour on the Daily Mail website,

For many, Hurricane Sandy is no less a disaster, but the slower speed of the event meant that it was Instagram that people turned to. Everyone has a phone. Everyone can capture a moment. Unlike the drama of 9/11, this disaster didn’t produce endless defining images, but rather, a hugely textured mosaic of tiny moments, that conveyed the intimacy, tragedy and humanity of the event as well as any Iwo-Jima style ‘Flag raising above the rubble’. 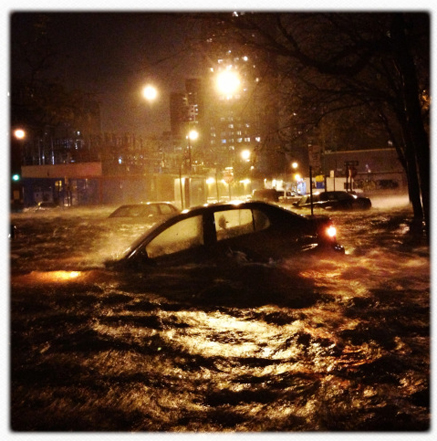 Recognising the power of Instagram as a documentary tool, Time magazine turned over their coverage of the hurricane to five hand picked photographers, who, without brand oversight, posted their images directly into time.com’s news stream. You can read the full details of how they did this here and look at their gallery of deeply moving pictures here.

The results were amazing, with the gallery driving 13% of all site traffic in a week when time.com had its fourth-biggest day ever. Time‘s Instagram account attracted 12,000 new followers, but elsewhere, before the storm had even made landfall, nearly half a million pictures had been posted online under #hurricanesandy. Overall, the storm is likely to be Instagram’s biggest ever event.

Forbes.com explained the phenomena like this: ‘It’s the mix of mobile entertainment and utility that makes Instagram such a social force for major events–both celebrations and emergencies. It’s a  visual twitter’ 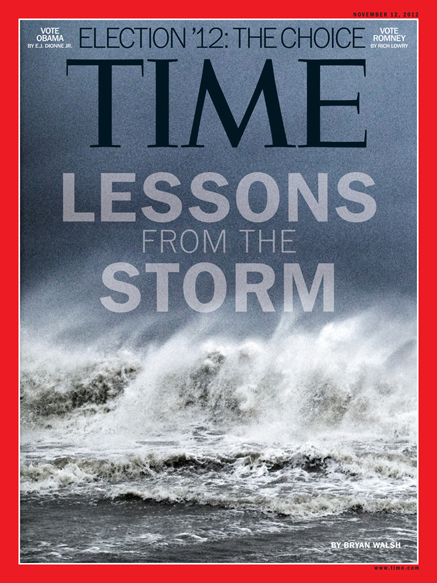 Well, maybe. Here is Time’s cover of the event, utilising one picture from their pool of Instagram images. It’s Ok-ish, but in no way does it represent the entire event. I don’t lay this at the door of the platform. Ben Lowy, who took this picture on his iPhone, has plenty of other images on his blog, many of which are much better.  I think it’s more a case of the editors’ not having a story, or a point of view they wanted to leverage. 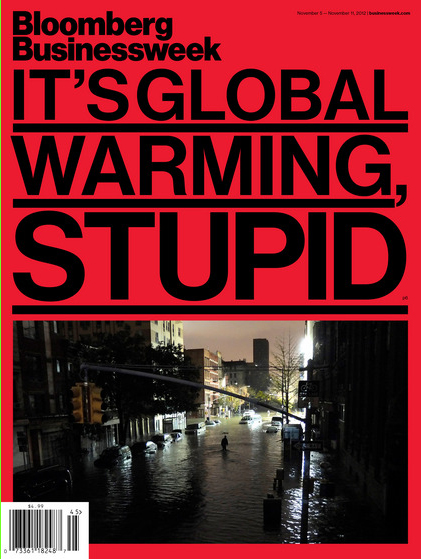 Much better is this cover from Bloomberg. Designed by Richard Turley, The World’s Number One Magazine Designer™, The picture could be one of a million different images, it really doesn’t matter. What counts is the  American election (It’s the economy, stupid) the coverline, and the power of the design.