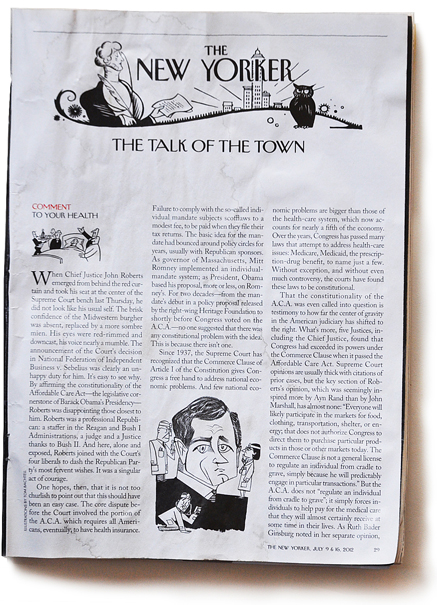 If you haven’t already guessed, this is my favourite magazine. Which seems more than appropriate since I’m currently consulting in New York City. You’ll find a shorter version of this post in the new book My Favo(u)rite Magazine, along with 88 other fantastic titles. It’s a brilliant project for a truly worthy cause, if you haven’t already done so, you can order yours at magculture right now.

I lived in New York City for three years from 2001, taking up a position on Condé Nast’s Mademoiselle, and Rolling Stone after that. When asked what I thought of The New Yorker, I replied: ‘Not much’, brought up as I was on a diet of Smash Hits, The Face and European news weeklies. What business did I have with pages of uninterrupted text and tales of some place called ‘The Upper East Side’

9/11 changed all that. Not only did I become a New Yorker in that moment, but suddenly I had an appetite for news about America’s place in the world I could really trust. And for me, trust is still the strongest editorial currency; a value The New Yorker has held for an awfully long time.

With the most polyglot population imaginable, New York is truly a world city. Along with the movies, TV shows and general mythology, I believe everyone carries a little bit of the city with them. Should we wish, we can all be spiritual New Yorkers even if we have never lived there.

I could have chosen many issues as my favourite, but in the end I plumped for one I was reading when writing this post. From July 9th 2012, it’s not exactly the current issue, but I only finished reading it in the bath last week.

One reason why print still works so well, is the visibility and sheer physicality of the navigation. You always know exactly where you are, both on the page and in the book. The New Yorker amplifies this benefit by setting the type perfectly, using a minimum of page furniture and appearing to never change.

This means the reader experience can become highly ritualised. Flip though the cartoons, read the reviews, zip through Talk of The Town, and only then dive into a feature.

In my July 9th issue, I’d pulled out pages 48 to 68 in order to keep the floor clean as I clippered my hair. But mercifully, the big TED talks feature ‘Listen And Learn’ had remained intact. I wasn’t planning to read ten thousand words on something I wasn’t exactly searching for, but such is my trust in the brand, I made a start.

And what a piece of journalism it is. Immaculately researched and full of insight, the story had such power that it ever-so-slightly adjusted my world view, in a way that I believe will be permanent. Which is surely the greatest thing any media brand can ever do.

Finally, the cover; a celebration of Barack Obama’s health reforms. And like all New Yorker covers, it works on many levels. As an illustration, it requires the viewer to exercise their imagination. But then, this opening of our minds then allows the masthead to really work its genius. Because with no other coverlines, the masthead becomes the caption. In this moment, Barack Obama clearly has become a New Yorker.

But more than that, (and at the risk of appearing in Pseuds Corner), if we are all spiritual New Yorkers, looking at any New Yorker cover means that in some small way, we end up looking at a reflection of ourselves.