America’s only national newspaper redesigns itself

Here is USA Today‘s new logo. Designed by Wolff Olins, it’s modern, clean, and I can completely see how they came to this solution. We’ll come back to the design in a minute, but for now, what does it actually mean? My first reaction was that the uncompromising minimalism says this is a brand that is still defined by what it is not.

Since it’s launch in 1982, USA Today has been lying around hotels and motels across America. It’s never caused much offence and I suspect never been read very often. But its mild mannered ubiquity has seen it become Americas second largest print newspaper along with a website boasting over 38 million visitors. So this redesign is a BIG deal.

Particularly, as instead of analysing the print, everyone is now interested in what all the web, tablet and mobile platforms are going to look like. I haven’t seen the paper yet, but I’ve zipped through the digital stuff and for the most part, it looks good. 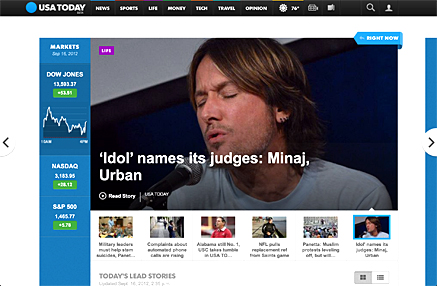 The site is very much improved. This is the new home page, which aside from the cool look and feel, has binned off the MPU ads, and replaced them with some massive full width display ads deeper in the site. Adage has good reporting on the new ad strategy. Which may, or may not work out… 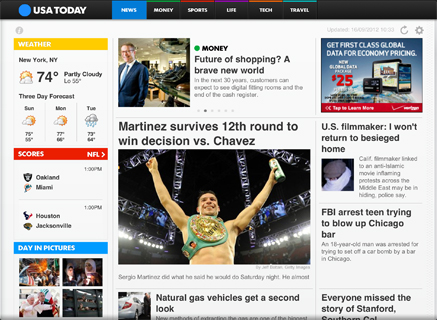 However, this is the tablet version, which is poor by comparison. Given how slick the browser experience is on a tablet, you really wonder why anyone will bother with the app. 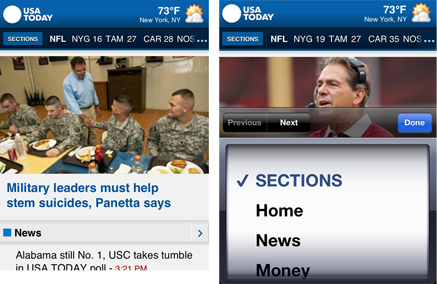 I suspect the mobile version has the potential to be the best of three. I really like the way it has been organised, here are a couple of screens to give an idea. 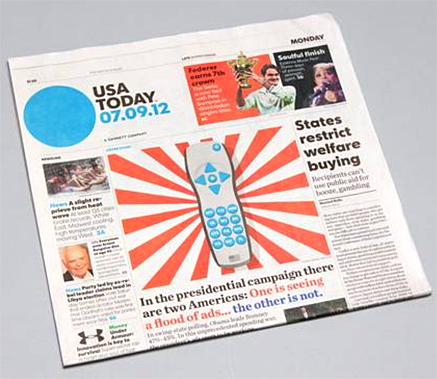 The paper looks good, although the central graphic flatters to deceive somewhat, as it doesn’t actually mean anything.  And of course, the headlines seem tiny to these European eyes. Other commentators on twitter have been less kind. @weareyourfek says: ‘The redesign looks like BuzzFeed printed out and turned into a car wash flyer’. Ouch! 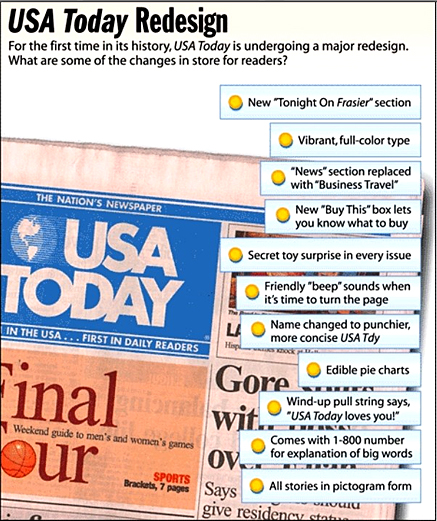 And as you might expect, The Onion has been particularly cruel, with this fantastic infographic, above.

Elsewhere, there has been plenty of comment on the business plan. The New York Times says that Gannett, who own USA Today along with 82 other papers and 23 broadcast stations, is attempting to consolidate all its news operations into one big hub. And that this redesign is a way of leveraging that benefit. It might also explain why ‘Gannett’ is part of the new logo.

But they also quote Alan D. Mutter, a respected industry expert, who says: “The real problem is what is the real mission of USA Today. It used to tell me the weather. Now I have the app for that. The once revolutionary and original mission of the paper has been usurped.”

Which brings us to the nub of the problem. USA today was launched in 1982 with the mission of ‘providing news and information that was clear, concise and presented largely without opinion’ (my italics).

To not have a point of view today just doesn’t work, if it ever did. With content everywhere, we need brands to guide us through, to make sense of all the noise, and to give us their valued opinion. Without that, plain content means very little.

Adage has good reporting here on the paper’s plans to improve this. They have hired the excellent Michael Wolff as their new media comentator, (read his great story on Tina Brown here) and there are plans to get the journalists allow their own voice come through more strongly. But can they really do it?

This is the slick promo video that explains the new mission. It starts well, with a big pitch about using ideas and visual storytelling to create a sense of unity in the nation. But then comes the bit where it declares that their product is all about ‘understanding and utility’.

NO WAY is that going to cut it. To quote Lady Macbeth, they need to ‘screw their courage to the sticking place’. They’ve made a big fuss about their new logo having some balls, here is a chance to use them.

They should get some hierarchy to the stories. It’s currently so flat that I cannot tell what’s important. They don’t seem to know either, as online the splash wanders around between either the Chicago teachers union going on strike, a random boxing match or a spat over Civil ware re-enactment authenticity.

This lack of editorial direction is transmitted through the new logo design like a tuning fork. The old logo was literal, the map device tells us that here is a newspaper for folks who, er, travel around America a lot. Not brilliant, but at least specific.

By comparison, the new logo seems reluctant to say anything at all. The structure is fine, as is the colour. The neutral typography might be OK if it was paired with a symbol that had something about it. Equally, the blue circle might just work if there was some engagement with the type. There is nothing that distinguishes the type from the headlines, and the symbol has no intrigue other than its emptiness.

Sam Ward, the designer behind the logo, has made a lengthy defence of the work, stating: ‘I believe our balls are symbols of who we are and where we’re headed. They are signposts, perhaps; reminders that offer inroads into America’s stream of consciousness’. If this is true, the logo will only really come to life if the editorial content does too.

1861 aside, America has never been more divided that it is today. For evidence on that, go no further than Romney’s recent 47% comment. Surely, here is a real opportunity for USA Today to grab the nettle, and lay down some clear markers as to their editorial direction. To tell us what they believe in, and to give us genuine reasons to listen to them.

A good model for this is Business Insider. It’s got great tone, a wide range of content and an excellent range of length. There are super fast tweets, excellent infographics and longer, indepth pieces. This fine analysis on Romney and the USA economy, gives a good idea of their expertise.

USA Today have given op-ed space to Romney, but that’s not the same as saying what they think. They don’t need to come out for either Romney or Obama, but they should tell us which parts of each candidates platform they agree with. Then, middle America might begin to take some thought leadership from the brand, rather than turning to other, totally polarised media outlets.

USA Today can maintain a balance, but they also need to accept Tibor Kalman’s best ever piece of advice: ‘If you make something no one hates, no one loves it’

Update: Under Consideration have published an excellent in-depth review of the redesign, showing how the logo circle acts as a content vehicle for all the separate sections of the paper.