The UK newspaper People closed their website a little while ago. Launched with the idea that it would be ‘Buzzfeed for grown ups’, pretty much everything went wrong, according to this excellent reporting from of all places, Buzzfeed. Patrick Smith reports that there was a lack of identity, a lack of focus, and a complete failure to grasp how the native advertising business model works. 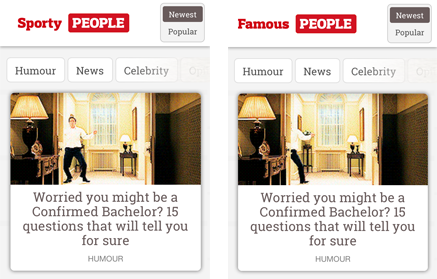 This lack of brand benefit is perfectly expressed in the website logo. The way it worked (or rather, didn’t), was that the People logo was preceeded by a rotating series of words; ‘Sporty’, ‘Famous’, ‘Glam’, ‘Funny’ and so on. The story underneath didn’t change, but the context did.

What this did was remove any trace of brand from the content beneath. The stories became entirely generic, no tone, no point of view, no recall. 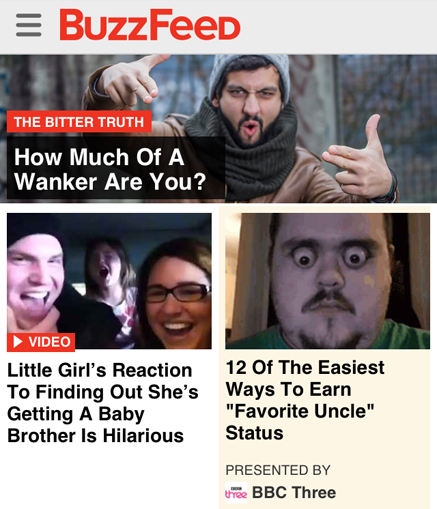 By way of contrast, this is Buzzfeed’s home screen from the very same day. Which, when you compare the lead stories of ‘Bachelor’ and ‘Wanker’, pretty well sums up why Buzzfeed’s tone is so sharp.

Print has similar issues, but the context is very different. On a newsstand, when is right to put a coverline above the logo, and when should you never do it? Find out more after the jump. 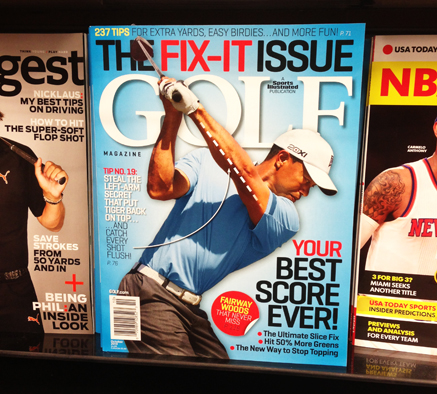 The purist view is that a coverline above the logo subjugates the brand mark. It says that content is more important, and as such commoditises the title. It drives it downmarket, and reduces the space available in the real selling spots below the logo. In the first instance, and research backs this up, coverlines above the logo are often completely invisible.

To put it another way, Vogue would never do it.

But not every title is a high end fashion glossy. For many, the coverlines ARE the primary reason to buy. So what are the circumstances in which they really can work?

Firstly, as this recent issue of Golf shows, it’s got to be really big and it’s got to be core to the proposition as both brand statement and reader benefit. Here, with a white logo, the black and red line is clearly seen before the masthead itself. And there’s no eye contact to distract the readers gaze.

Intriguingly, and I have never seen this before, it has a secondary line above the big one, that details out the story. Without wrecking the aesthetic, the tiny yellow number stands a fair chance of being seen, and effectively closing the sale, which is what coverlines are intended to do. 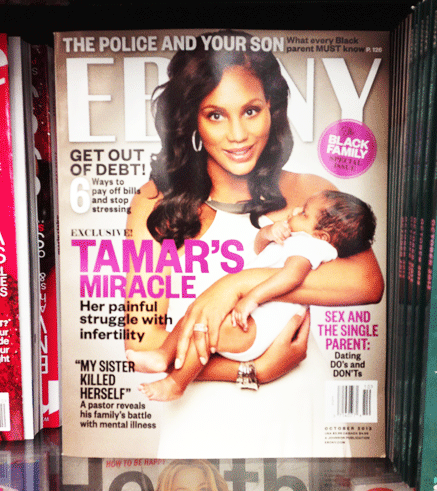 The real estate above the logo can also serve as a container to separate content that could otherwise confuse, or just get lost within the main cover.  A real life story for example, could appear to be attributed to the cover star. But in the case of this issue of Ebony from last year, the content is so provocative, it would change the overall feel-good cover vibe. Next to the words ‘The police and your son’, is the smaller line: ‘What every black parent MUST know’. This of course is in response to the Trayvon Martin case in the USA.

This cover of Women’s Health adopts a different approach

First up, the retail environment sucks. There’s a purple strip covering the bottom quarter, and the title seems to have been racked next to some Dead Kennedy’s.

Unlike Golf, the Logo is hot pink, and there is full-on eye contact, so that’s what’s seen first. After that the eye is drawn down to the Hot Body Express hot spot, ‘Sex Confessions’ and all the rest of it. So the roof line has to work really hard to drag the eye back up again.

But it succeeds as a result of four things. It’s really big, it’s got a huge splash of yellow behind it, the handwriting is disruptive, and the line itself is core to the proposition. More that that, it also works on the tiny strip just visible behind the Kennedy cover to the left.

However, this brings us into the world of YELLOW, and what the use of that colour really means on newsstand, on branding and beyond. It’s a big subject, so it’ll get a post of it’s own in the very near future.