‘There aren’t many magazines that can truly claim to capture a moment. This one did.’ 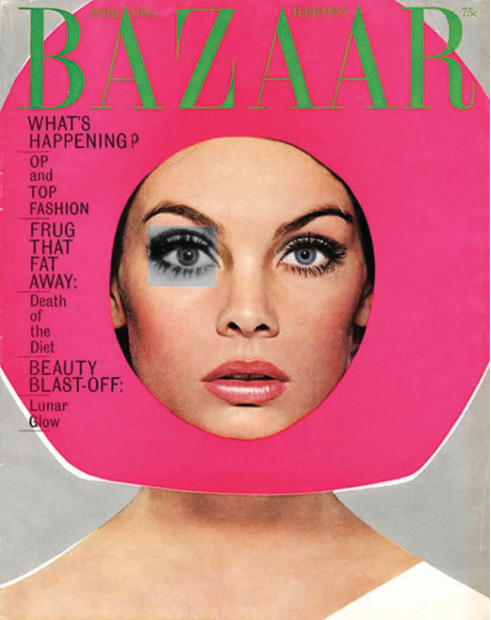 Here’s another amazing piece of work you’ll find in ‘My Favo(u)rite Magazine’, the excellent book produced by Magculture in support of Bob Newman. This very fine piece of writing is by Marissa Bourke, the Creative Director of Harper’s, talking about the very same title.

‘In April 1965, American Bazaar commissioned one of the most influential photographers of all time, Richard Avedon, to guest edit an edition. He acted as editor and sole photographer for the issue and, along with Art Directors Ruth Ansel and Bea Feitler, created one of the most beautiful magazines ever collated.

There was a freedom, an energy and a confidence in the pages — the special colours, the seminal, neon cover of Jean Shrimpton with the odd-but- intriguing lenticular eye device and the great-but-obscure coverlines. Nearly 50 years on, this cover looks like it was made yesterday.

Avedon shot portraits for the issue of Roy Lichtenstein, Jasper Johns, Robert Rauschenburg, ‘the new young man’ Paul McCartney and rising star Andy Warhol. The contributors page was all done in a photo booth. It’s important to understand how radical it was. Its stance was far from that of the straightlaced ’50s of only a few years earlier. He featured black models, a woman in a spacesuit (space at that time was a very male domain) and embraced youth culture in ways that many at the time didn’t appreciate. The issue wasn’t well received commercially or critically, and it was one of Avedon’s last issues for Bazaar before he followed Diana Vreeland to Vogue.

He captured in one edition the broad spectrum of the mid ’60s, from the political battlegrounds of the Cold War space race and social unrest to Warhol, the Beatles and fashion, high and popular culture side by side.

There aren’t many magazines that can truly claim to capture a moment. This one did.’

If you want to buy My favo(u)rite Magazine, you can do so here at Magculture.com.  If you want to know what my favourite magazine is, here’s another, slightly bigger clue…