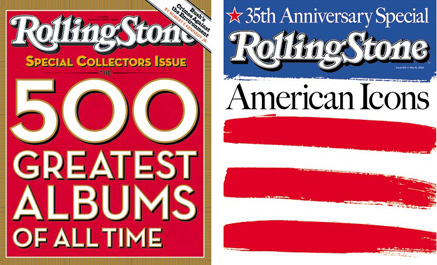 This is the trouble with being self employed. You promise yourself you’re gonna blog like crazy, and then a whole load of paid work comes along. So apologies to for not answering this question as promised in my last post, I’ll remedy that now.

I designed both of these covers in the same year. Both are all-type solutions, but one was the best selling issue of the year, the other the worst. Most people can guess which is which, but many can’t, and for good reasons too.

The best seller is of course the 500 greatest abums of all time, doing exactly twice the numbers of the anniversary issue. Why? Well, it’s leveraging Rolling Stone’s authority to a story that readers might actually be interested in. It’s an incredibly simple, ‘Ronseal’ proposition. I don’t much like the look of it, but it does have the feeling of an issue that is to be valued, to be kept, and to be shared.

By contrast, we all LOVED the look of the anniversary issue, and were dissapointed when it tanked so badly. But on reflection, what’s happening here is that the brand has overplayed it’s own importance. I genuinely believe Rolling Stone to be an American icon, but that is of itself no reason to buy.

However, advertisers saw it very differently, the vanity of being associated with a whole bunch of icons was hugely appealling. It was stuffed full of ad pages, which at the height of Rolling Stone’s power had a book price of $50k each. Jann Wenner may have lost a few dollars on the newsstand, but he more than made it back on the pagination.