‘There are no skeletons in the closet, and I got knighted, so that proves it, doesn’t it?’ 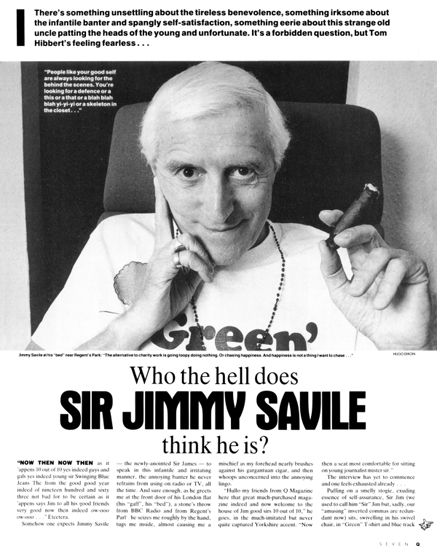 So said Sir Jimmy Savile under questioning from Tom Hibbert in his now heavily quoted 1990 interview for Q magazine.

The big line is Savile saying ‘I was hanging around in the porters lodge ’til about half past two this morning, wheeling in corpses’. But the whole piece is a quite extraordinary story, which you can (just about) read here, here and here. Thanks to Andy Pemberton, himself an ex-editor of Q, for the links.

Sadly, Tom died last year, and with him, went one of the very few writers whose style was potent enough to define the titles he wrote for; first Smash Hits, and then Q.

Aside from being the vehicle for Tom to display his astonishing interviewing and writing skills, ‘Who The Hell’ was one of the great magazine franchises. Devised by Editorial Director David Hepworth and the Editor, Mark Ellen, it ran from launch well past the 100th issue. It only ended when PR’s wised up, and stopped allowing their clients to be interviewed by Tom, for fear of the mangling they would receive.

As launch Art Director, I designed the template, although this Savile page was almost certainly laid out by Tim Harrison, the Art Editor at the time. Who intriguingly, was also the ex lead singer for 80’s British folk/punk band The Dancing Did. 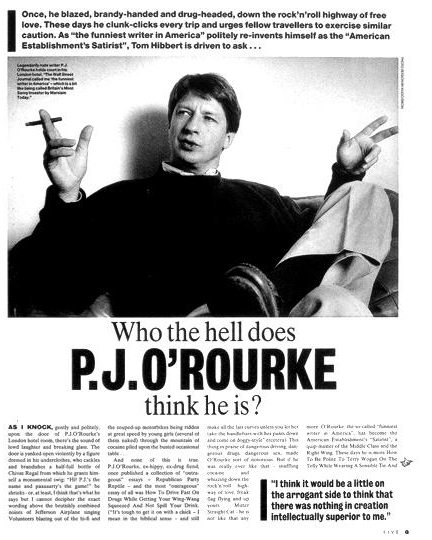 The genius of this franchise, was that it was sited the very front of the title, so it completely set the tone for the entire brand. It let readers understand that this was a magazine with a point of view, a sense of humour, and a brilliant tone and style. What’s more, everything that followed benefited from its halo effect.

Font fans may like to know that later versions of the page dispensed with the over styled headline font and moved to a much calmer Grot No.9, as here. P.J O’Rourke was laid out by either Art Editor Shem Law or myself, I can’t remember who! 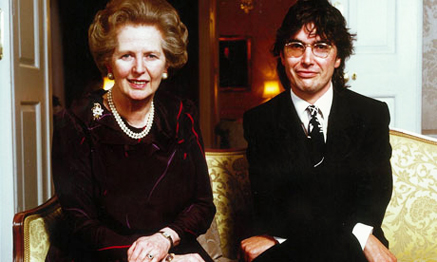 Tom’s biggest scalp was undoubtably Margaret Thatcher, who when pressed on the sort of pop music she liked, confessed to an admiration for ‘How Much Is That Doggie In The Window’

The pictures were usually taken by Paul Rider, who shot Maggie and Tom, Chris Taylor, and in particular, the late Hugo Dixon, who took both the Savile and P.J O’Rourke portraits. All understood exactly the direction required: fly-on-the-wall, a feeling of intimacy, and a tremendous sense of grandiosity. Tom published a collection of all 95 of his “Who The Hell” interviews, a few copies of which appear still to be available on Amazon.