Nuts is copied by Zoo EXACTLY! 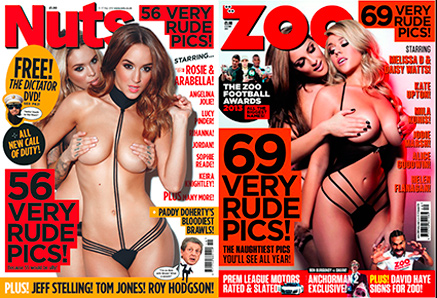 On the left is an issue of Nuts from exactly one year ago. On the right is the new issue of Zoo, published this week.

When the Zoo editorial team were trying to work out their cover presentation, one must assume they were so taken with the Nuts approach, they just decided to copy it. One has to admire the brazen cheek of it, but it can’t be particularly rewarding for the Zoo team, having to slavishly copy your rivals work.

But the fact is, this attempt to cause confusion in the minds of the readers helps neither title. Zoo can’t claim to be a brand in its own right, Nuts is tarred by the brush of its lesser rival, and the public are taught that both offerings are generic.

Since both titles launched within a week of each other eight years ago, Nuts has always sold substantially more. To the naked eye, both brands appear similar, but they’re genuinely quite distinct. Nuts is generally regarded as the classier, funnier read, and has maintained way more consistency in it’s editorial direction. By contrast, Zoo has struggled to define itself in anyway that’s distinct or different to Nuts, other than to be ruder.

Which is why they ripped off this cover design, as it’s closest to thier own idea of who they are.

Given that digital editions are becoming increasingly important, it’ll be interesting to see how Nuts continues to manage it’s relationship with Apple, as it is they who cast judgement over what will or will not be sold in their newsstand.

In the future, it’s highly likely that both brands will need to define themselves in a world when nudity is no longer an option.