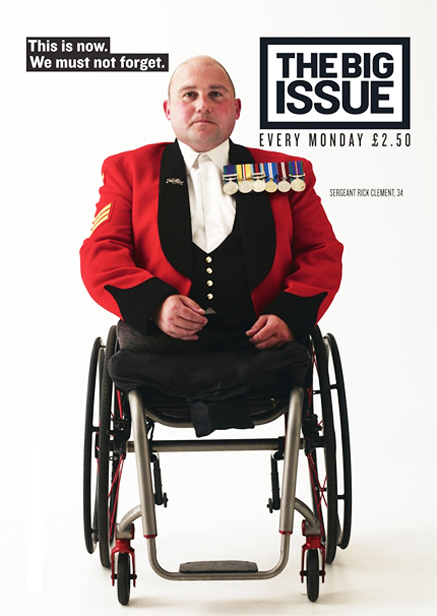 The Big Issue has won the prestigious 2015 PPA Cover of The Year award with this powerful image of former Sergeant Rick Clement. The cover was designed by art director Scott Maclean and the photo taken by rock star turned photographer, Bryan Adams.

Judged by public vote it secured over 25% of all 30,000 votes cast, beating out Elle, Time Out, Shortlist and GQ, with the pre-race favourite Radio Times‘ Doctor Who cover not even getting in the frame. 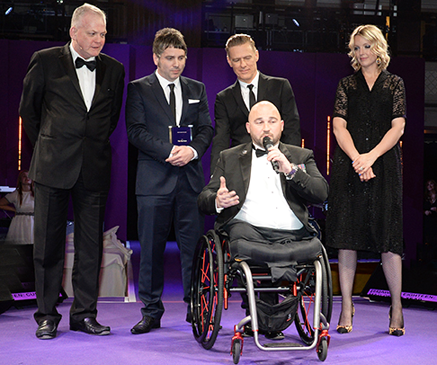 The award was accepted by Big Issue Editor Paul McNamee, who in a moment of considerable drama, then invited Rick Clement onto the stage, with his wheelchair pushed by none other than Bryan Adams himself. Here they all are, flanked by PPA CEO Barry McIlheney and host for the night Lauren Laverne.

It’s not often you get a thousand industry hacks to pay any kind of attention, but on this occasion there was nothing we could do but deliver a heartfelt standing ovation. In the silence that followed, Rick took the mike, and after explaining what a pleasure it was to be with a bunch of people who were as legless as he was(!), he paid tribute to the mates he left behind in Afghanistan, declaring that this trophy was ‘for them’.

I’ve been to plenty of industry awards, but I’ve never seen anything like this. Apart from being genuinely moving, it was a clear reminder of the Huffington Post’s recent declaration that a magazine cover remains ‘one of the modern age’s most widely consumed pieces of public art’.

The Big Issue has a long suit when it comes to front cover innovation. From crowdsourcing their Christmas cover, to leveraging the heart of their brand, using a hashtag strategy to celebrate their vendor, all the way through to understanding what makes you pick up a cover in the first place. The Big Issue may have a unique distribution method, but their editorial skill is universal. It talks to the reader one-to-one, it’s personal and it’s emotional.

Returning to their cover of Rick Clement, I’m reminded of the editorial photographer Giles Duley, who also lost his legs to an IED in Afghanistan. Both these men are pushing on with new ventures, determined not to let their injuries make them victims. Rick leads an impressive looking charity for injured soldiers at A Soldiers Journey, Giles is now setting off on Legacy of War, a massive project documenting the long term cost of conflict around the world. It’s a going to be a really important body of work, you can support it here at Kickstarter.