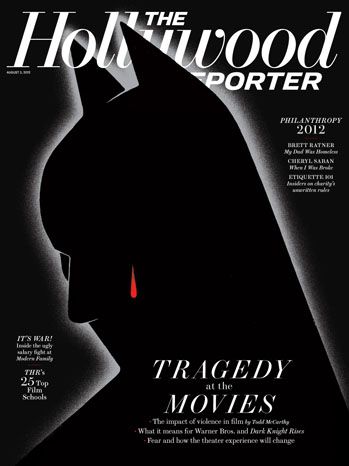 America’s movie industry takes stock after the Aurora shooting, with this deeply moving cover from The Hollywood Reporter.

It may be weekly, but this cover delivers a feeling of quality and purpose that would dignify any world class monthly. Editorial Director Janice Min knows more than most about how to connect with an audience, as she was previously the powerhouse behind Jann Wenner’s Us Weekly in New York.

Her work at The Hollywood Reporter has been impressive since she arrived. So much so that in 2011 she was named by the Huffington Post as one of their media game changers of the year. I haven’t read this new issue, but Twitter suggests those who have found it very well reported.

To me, this looks like the cover Vanity Fair would wish they could do, if only they were a weekly. (Although I have been reminded that Vanity Fair Italy is weekly, but went in a very different direction this week)

This cover also feels eerily reminiscent of The New Yorker’s black on black 9/11 cover, suggesting that within the movie industry at least, the Aurora disaster might be seen in a similar light.

Illustrator Edel Rodriguez produced the art work, here’s the SPD post showing how he made the drawing. The grey halo around Batman’s head is apparently silver ink on the printed magazine. (Since I made this post, it’s been pointed out that Batman’s red tear drop looks like the eye tattoo favoured by those who have killed a man. I don’t know if this was Edel’s intention, but it certainly adds another layer of meaning to the work)

Shanti Marlar is the Creative Director of The Hollywood Reporter, previously (surprise!) with Janice Min at Us Weekly. Here’s the full story of how she redesigned the magazine back in 2010. A fine tale in its own right, this SPD post by Josh Klenert is packed with great visuals and plenty of insight.

But back to the story; here’s what The Hollywood Reporter’s own site says about their cover: ‘The new issue looks at the aftermath of the fatal shooting in Aurora, Colo., and how Hollywood will recover from the event — from the impact that violent work like The Dark Knight Rises can have and how movies like it will be made, marketed and seen in the months and years to come’

It’s a story I want to read.