What makes you pick up a cover, even when it’s free? 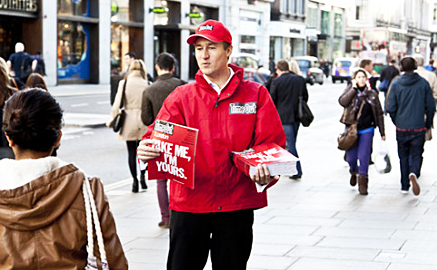 A couple of weeks ago, Time Out went free. Here’s one of their distributors handing out the first issue of their Brave New Business Plan. Knowing this, and as a spoiler of sorts, the Big Issue responded with a very clever cover proclaiming that it’s ‘Worth paying for’. 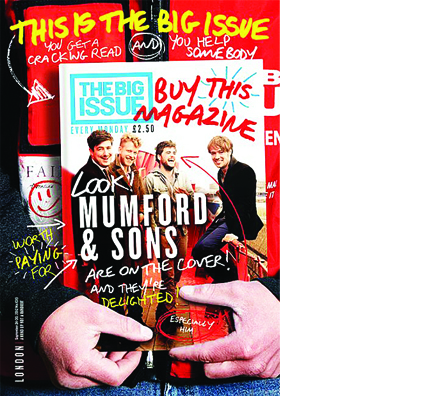 Which it undoubtably is, given that the money goes directly to a homeless vendor. But it’s also true to say that this unique business model means that the customer is not just paying for the content. The value and reward is all wrapped up in the transaction itself, which this particular cover explicilty visualises.

What’s more, the halo effect of this transaction spills over into the appreciation of the content, making you feel good about what you’re reading. That said, for most of their readers I suspect the content is a secondary reason for purchase. This makes the Big Issue content essentially free.

But the fact remains that both audience and brand have a strong social conscience. And along with their vendors, all believe their actions can improve matters. This gives the Big Issue a unique opportunity to put stories that matter in front of people who otherwise would never read them. Thier website proclaims that here is ‘Journalism worth paying for’ Like supporting the homeless, the challenge for all of us is to make sure that both these ideas don’t just fade away. 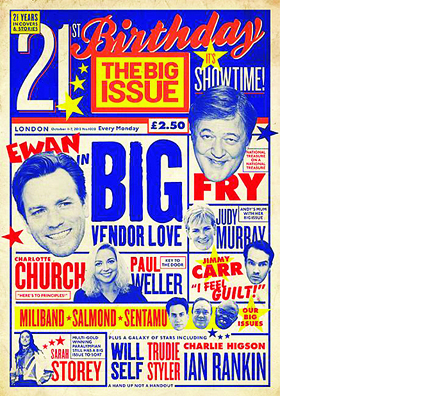 And a great cover is the very best way of keeping their brand on the boil. It makes the purchase experience exciting, it dignifies the homeless vendors’ investment in their stock, and it allows the reader to explain to the world who they are in that particular moment. And as if to prove that very point, here is their latest. The execution is stunning, matching anything Bloomberg and the like may be able to produce. 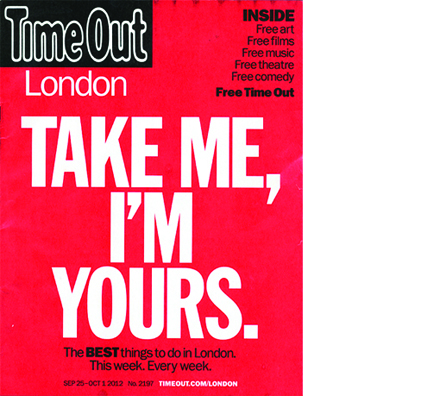 Time Out now have an entirely new agenda, as this, their first free cover shows. It’s direct and to the point, a clear demonstration of the brand’s ubiquity and utility. Weirdly, as a subscriber, I don’t miss the loss of pages that much. It still tells me what’s on, and whether its any good or not. And it gives me ideas about things to do that I’m not explicitly searching for. But it doesn’t do much more, which means it’s dangerously reliant on the usability and portability of print as the reason for the magazine’s existence.

As Shortlist Media has shown with Stylist magazine, quality covers are still essential in the freemium marketplace. Without the commitment generated by paying for it, the cover needs to create a sense of intensity in the relationship with the reader. There is permission to take risks, be controversial, and best of all, not worry about proving there is enough inside to make it worth the cover price. Less obvious, but increasingly important, a good cover helps deflect any discomfort over being sold to by the advertisers in the issue, and increasingly, in front of the cover itself. 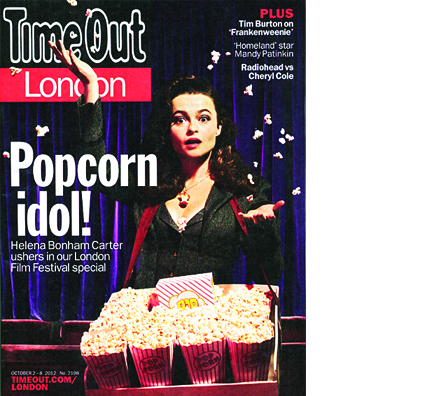 Which brings us to this, the second issue of the all new, free Time Out. This made for lively debate in the office; Who is their audience now? What are they actually trying to do?

Peter Preston has a good piece in the Guardian about the lack of detail in the listings, its relationship with the competition, and the general proliferation of free magazines. But what does that mean for the cover?

With a paid proposition, a brand can be very clear with advertisers who’s buying it and why. Time Out’s paid audience was passionate, committed, and pretty knowledgable about film, food and all sorts. But recent covers have never really reflected that, with a reliance on the newsstand orientated play of LOTS and LOTS of lists. But now, do they attempt to sell the benefits of being associated with the refined tastes of their traditional readers, or do they become shamelessly populist in order to match expectations of a much larger and diffused audience?

This Helena Bonham Carter cover has divided the critics. For some, it’s neither one thing or the other. She’s not recognisable, she’s not famous enough, and the core idea is not visible enough. The headline doesn’t say much and the whole thing is very dark. Yet for a longtime lapsed reader who just strolled through my office, it was a huge success. He had re-sampled the brand, (as it was now free), found the cover compelling and intriguing, read the interview and proclaimed to me that he LOVED Time Out, despite not having bought an issue in the previous ten years.

Then he put it in the bin.