Sue you! Sue me! Sue everybody! 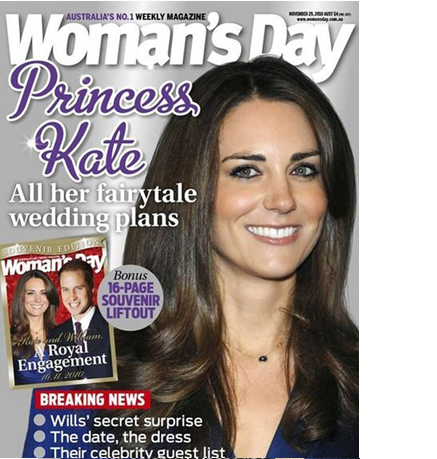 Except the Royal Family don’t sue.

There are no real grounds for legal action over this old Woman’s Day Princess Kate cover, other than perhaps on the matter of typographic taste and general layout. But this week, In defiance of a world-wide agreement to respect their privacy, Australia’s best-selling celebrity weekly has published long lens pap shots of Kate and Wills on their honeymoon of a year ago. Not only that, the headline: ‘Our Island Paradise’, clearly suggests this is a ‘with permission’ story.

Australian magazines have plenty of form when it comes to sticking up two fingers at the Royal Family. New Idea broke the story of Harry’s 2008 deployment in Afghanistan, while the infamous ‘Camillagate’ tapes of Charles and Camilla were broken by Bob Cameron when he was Editor of New Idea back in 1993.

This may have something to do with the longstanding tension between Australia’s history as a British colony, and the never ending debate around their republican ambitions. But the fact of the matter is that they don’t really give two figs for what folks in the old country think if they can just sell a few more copies.

And for Australians, being seen wandering around in your swimmers is really no big deal. It’s a beach culture, they are way less hung up about seeing people running around in a bikini.

The risk to Woman’s Day, is that readers will turn against them, associating them with the kind of intrusion that eventually killed Princess Diana. The benefit is that they will sell a shed load of copies, but more importantly, everyone will talk about the brand, as my earlier post points too.

Given that Woman’s Day and New Idea have always been locked in their own private celebrity weekly death match, I guess that’s a risk they feel is well worthwhile.