Should covers be designed for social media first?

This is not the new issue of Chat, and I’m not saying it should be. But given the success of TIME’s recent breastfeeding cover, it’s worth understanding the power of social media on newsstand sales. It’s been a while since one cover so completely dominated the  conversation. If you missed the controversy, have a look at adweek, the Guardian and newsstandpros.

The topline is that all this social media activity allowed TIME to sell a lot more issues on the newsstand. They significantly increased their subs, both in print and digital and in addition, it wound up both Newsweek and Bloomberg, creating a good buzz around the whole newsweekly market. 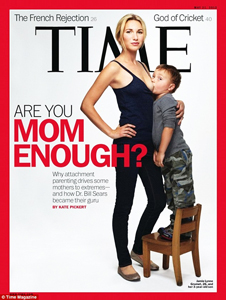 One of the reasons why newsstand sales are going down, is because readers are not going up to the rack in the first place. But if the cover can create a noise online, curiosity can make readers seek out the title, to see what all the fuss is about.

So, out of my own curiosity, I mocked up Chat with the TIME cover picture. The resulting cover breaks every single rule in the real life canon. There are not enough stories, there’s no rape or murder, there’s not enough colour, and there are certainly no prizes. It won’t sell, or at least it won’t sell to Chat readers

No matter how good Chat’s covers are (And they are, see my earlier post at coverthink),  they never generate the online buzz that TIME did.

Fashion magazines have long been able generate press with their celebrity access, as demonstrated by Elle’s excellent new Beckham cover at gymclass magazine and magculture.

Given that mass market women spend as much time in social media as anyone else, I think this is a space we could push our bigger circulation covers further into.