Newsstand is bending the biggest brands out of shape

This year at the PPA conference, Top Gear magazine’s editor-in-chief Charlie Turner made an excellent presentation about what was surely the biggest motoring scoop of 2012.

When the new Aston Martin One-77 was launched a couple of years ago, it was so expensive (£1.2 million) and so exclusive that Aston decreed, ‘No journalist will ever drive this car’. The idea being that the driving experience had to remain that of the owner, and the owner alone.

A fine piece of PR, but Top Gear found a way round by way of a super-wealthy oil sheik, a collector of super-cars and a fan of Top Gear. He said he’d buy a One-77, let Top Gear magazine drive it, then sell it on.

So the editorial team had a day’s notice to get to Dubai where they had just four hours in the desert with the car. Photographer Justin Leighton took over 8000 shots, he and Charlie made this good looking video and Tom Ford wrote the whole thing up. 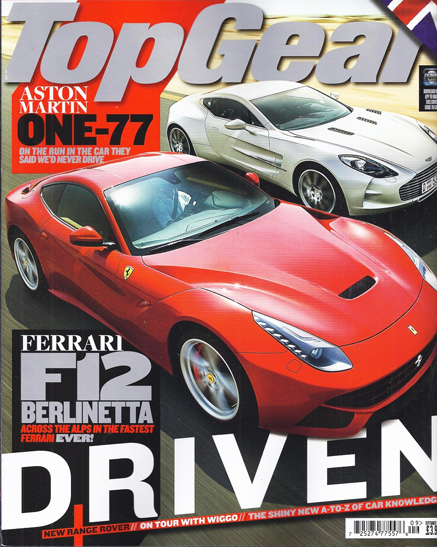 As Charlie told it at the PPA conference, it’s a great story, but right at the end of the tale, we learned that although the scoop was on the cover, it had been aced by a great big red Ferrari. It was, as David Hepworth, the PPA panel moderator said, ‘a duvet moment’.

When I asked Charlie how this came about, he reflected ruefully that the One-77 isn’t actually very good, and that these sorts of cover decisions were ‘political’.

He didn’t elaborate, but I am assuming that Ferrari had understandably been promised the cover in return for access to the car.

Which puts the editor between a rock and a very hard place. Why run a review of two-year old supercar which no-one will ever see, let alone sit in, mightily piss off Mr. Ferrari and risk a newstand drubbing at the hands of Car and Evo, who could very well have the Ferrari themselves. The bottom line is that Ferraris will absolutely sell more copies. Given that publishing isn’t a charity business, Top Gear did what they had to do.

But the result is that the cover ends up looking like all the others. Some kind of head-to-head test, flattening out the quality of the work, making the whole offering feel generic and not at all special, either for Ferrari or Aston Martin.

As Charlie told us the Aston story came in really late, I can only assume it was not possible to put the One-77 on a subscriber cover, as that could have solved the problem. Those would have been the issues sent to advertisers, the industry and used in upcoming PPA conference presentations, allowing Top Gear to own the event, whilst the red Ferrari happily sold its socks off in Smiths.

Top Gear is not alone in having to make very hard decisions around newsstand sales, but at the end of the day, they’re a big enough brand for this not to hurt them. Far more troubling is the way many other titles are seeing their brand DNA being bent totally out of shape by the demands of newsstand, whether they be celebrity weeklies or more specialist titles.

What’s needed are innovative ways to get cover ideas in front of potential customers without them needing to be standing in a shop or browsing Apple’s newsstand.

Social media can really work here, witness Elle’s success with David Beckham, The NME’s ‘record that changed my life’ and Time’s breastfeeding mom. Combined with traditional PR and SEO, all these initiatives drove print purchase. The challenge now is to think of new ways to seed a cover idea in a readers mind, and how to create promises that are still worth spending money on, whether that be in print or digital.