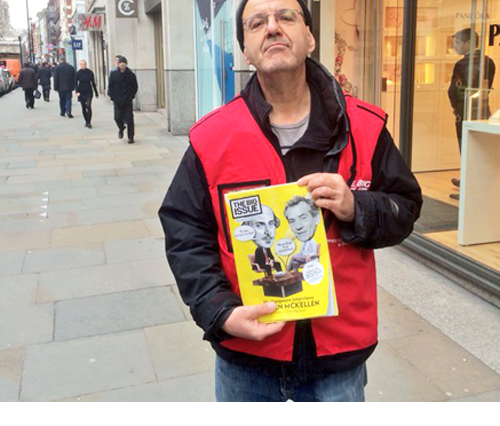 Buying a copy of the Big Issue is a highly complex transaction. Are you paying for the journalism, or are you supporting a homeless person trying to make a go of something for themselves? In the world of publishing, the Big Issue has a unique business model, as it’s the interaction with the vendor that delivers so much of the value to the customer.

This week I found out for myself, as I took part in #vendorweek, celebrating the people who sell 112 different street papers throughout the world. Along with a bunch of editors, supporters and ‘personalities’ I had agreed to don an official Big Issue vest and see how many copies I could shift in London’s Covent Garden.

But soon, standing alone outside Pandora I realised that the Big Issue tabbard appeared to have made me invisible. Not only that,  but the thing I was really selling here was myself, and my perceived plight.

All told, I sold two copies. The first was to a chap who just wanted to donate me a pound, but not take the magazine. I literally had to run back up the street to get him to take it back; ‘Nah, mate, I can’t take your quid if you can’t take the magazine’. At which point he relented and bought an issue. Fair enough.

By this point, I was getting no-where just asking folk to ‘buy the Big Issue’, so I had started to quote the cover story, a somewhat high concept piece about Sir Ian McKellen interviewed by Shakespeare, apparently.

‘All the world’s a stage, and all the men and women merely players’ begins the feature. This became my fairground barker schtick, the claim of a world first, a journalistic exclusive, and that it was all inside THIS, the very latest Big Issue.

But as before, blank indifference, perhaps a wry smile, that was it.

The indefatigable Paul McNamee is the editor of the Big Issue. He’s rightly won a sackful of honours and currently holds the PPA Cover Of The Year Award noted on this blog earlier. But if ever I wished for a different cover splash, this was it.  ‘Bloody Shakespeare, why can’t this be a Wogan cover’ I muttered, even though the issue had gone to press before he died.

Then, just as I was finishing my hour, a chap came from out of my eyeline and bought an issue. I hadn’t seen him before, he must have heard my pitch and come back.

At which point I experienced a true sense of accomplishment. Moreover, this man gave me the idea that I’d been seen, and accepted for who I was, or at least pretending to be.

All told, I’d made £2.50 profit for the Big Issue. But this last exchange was worth more than that to me, it gave me confidence that I could do this, that if needed, I could keep on going.

Thanks mate, much appreciated…

(For those interested, here are several other stories about The Big Issue I have written over the years)

How #celebrate your vendor creates value for The Big Issue

Why The Big Issue is worth paying for